This guide assumes you have your vehicle working according to the Creating a Vehicle section.

If you're modifying the values in runtime in the Editor, remember to backup your values before exiting Play mode. Either note them down to paper, or use the Copy Component / Paste Component Values options in the component's context menu.

All magnitudes use International System of Units (SI)

Unless explicitly noted otherwise, all magnitudes in Vehicle Physics Pro are in SI units:

Configure the vehicle's mass in its Rigidbody component.

This mass represents the total mass of the vehicle in driving conditions as if we put it on a scale, including driver, passengers, fuel, wheels, cargo, etc.

Add a GameObject to the vehicle and name it CoM. Configure it in VPVehicleController > Center Of Mass.

Longitudinal position of the CoM (Z):

Vertical position of the CoM (Y):

The sideways position of the CoM (X) should be 0 (middle of the vehicle).

After configuring the CoM you may need to make adjustments to the suspension for accommodating the new weight distribution. Typically:

Inertia plays a critical role in the handling of the vehicle. Configure the inertia in the section Inertia of VPVehicleController.

More details and information on configuring the Inertia: Inertia Helper

The suspension distance (m) should be configured for matching the vehicle's specifications. If these aren't available, try to figure out the complete travel distance of the suspension based on observations in the real vehicle.

The anchor (%) simply defines how much the suspension is currently compressed in the 3D model.

You can monitor the compression of the suspension in real time in the Telemetry window (VPTelemetry component) Susp column.

The compression values as shown in the Telemetry should never reach 1.0 or adverse physics effects may occur. This is by PhysX design/bugs and there's nothing we or Unity can do.

The VPWheelCollider component includes an option to configure both spring and damper based on the vehicle's mass, the number of wheels and the suspension distances: 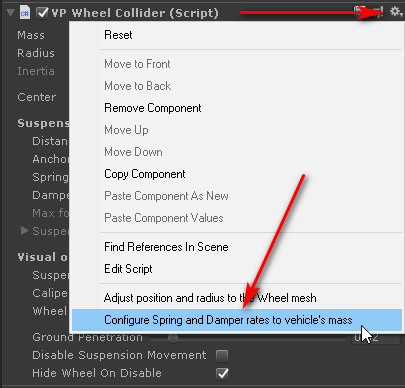 The rule of thumb for the spring rate is:

You can always use real spring rates or any other values that fit better with your vehicle.

Dampers (or shock absorbers) limit the suspension movement and damp the spring oscillations. The damper setup affects the angular momentum of the vehicle on weight shifting situations (accelerating, braking, cornering...).

The damper rate (N/ms-1) should be configured so the oscillating behavior resembles the real vehicle.

The rule of thumb is for the damper rate is:

You may use a VPResetVehicle component to drop the vehicle from some height (Enter key), then observe how the suspension oscillates. Configure the damper rates until the result looks good enough for your vehicle. 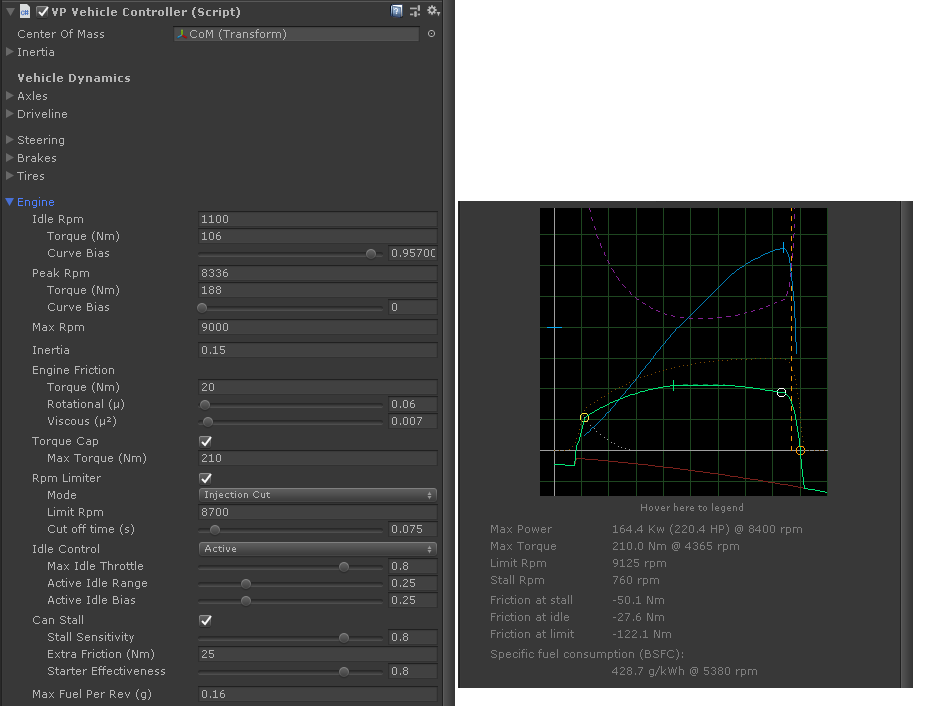 The Curve Bias parameters have some influence in the transitions between Idle and Peak.

The inertia defines how much "effort" takes to modify the rpm in the engine. Formula 1 style engines have very little inertia (0.1-0.2), while trucks have a large inertia in their engines (8-10). Standard cars are around 0.3 and 1.

The Engine Friction (red curve) produces the engine brake effect when no throttle is applied. It's defined by a base Torque (Nm) and two coefficients of friction, Rotational () and Viscous (). The effect of these parameters can be lively observed in the graph.

Torque Cap clamps the torque curve (green) with the given value. This simulates an electronically imposed torque limit.

Rpm Limiter limits the rpm the engine can reach.

If the engine Can Stall the parameters can be configured as well:

The Starter Reliability can be used to simulate external factors such as drained batteries, cold temperatures, mechanical failures, and so on.

As happens in reality, a stalled engine can also be restarted inertially. That is leaving the vehicle running down a slope in neutral, then engaging a gear and releasing the clutch.

There are two main types of clutch in VPP:

A disc plate clutch typically used in cars with Manual transmission, where the clutch is operated via clutch pedal.

Max Torque Transfer defines the maximum amount of torque that can pass trough the clutch. A good value is around 1.5 times the maximum torque the engine can produce (Max Torque in the Engine's specifications). 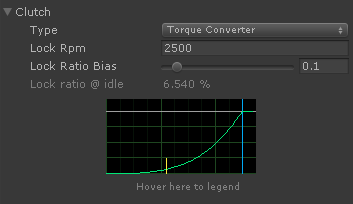 Lock Rpm is the engine rpm where the torque converter produces a full lock. A good value produces a lock ratio at idle around 6-10% (Lock ratio @ idle in the inspector).

The Torque Converter may also be used with the Manual Transmission. This effectively provides an automatic clutch in cars with manual transmission, which is great for the gameplay when the car is controlled via keyboard, gamepad, or devices without clutch pedal.

The transmission is configured in the Gearbox section. 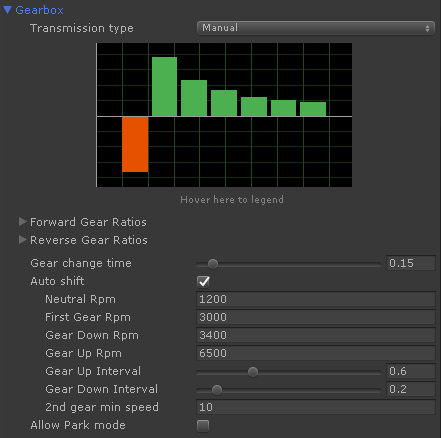 The Transmission type can be either manual or automatic:

Gears are engaged individually with a minimum interval among each change (Gear change time (s)) where the gearbox passes thru Neutral.

Gears are progressively engaged, with a smooth transition in both torque and rpm among each gear.

Any number of gears and ratios can be configured for both forward and reverse gears. Standard cars typically have 4 - 6 forward gears and one reverse. Trucks may have 12, 18 or even more and several reverse gears.

Requirements for gear ratios are:

In order not to change gear up if the drive wheels have lost their traction, the Auto shift mode only engages the 2nd gear if the vehicle's speed is above the 2nd gear min speed (m/s) value.

The Park mode is characteristic of the Automatic transmissions, but it can be simulated in Manual transmissions as well (Allow Park mode).

Configure which axle(s) from the Axles section are driven and the transmission devices between the gearbox and the drive wheels.

Tire friction defines the grip of the wheels based on how much they are slipping. 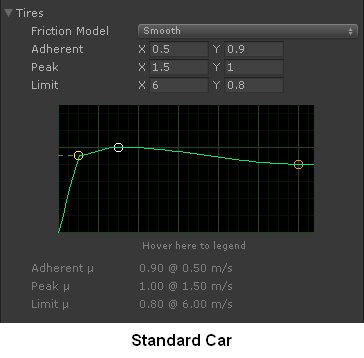 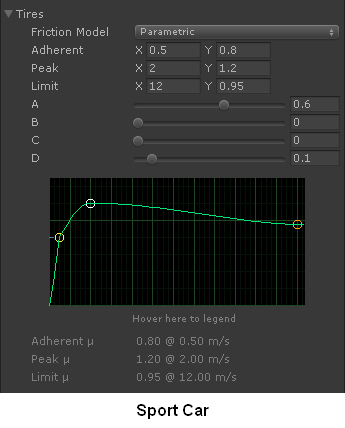 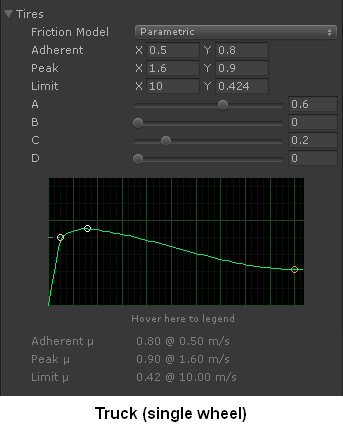 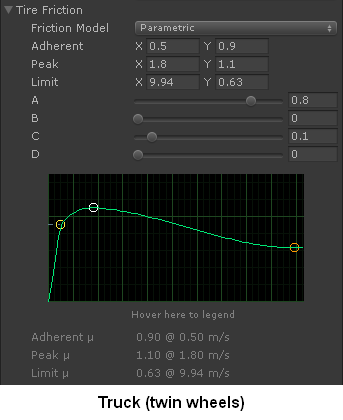 Configure the Maximum Steer Angle for the steering wheels.

Enabling Ackerman requires a reference Transform in the vehicle:

This provides the standard Ackerman geometry. You may tweak it further by modifying the longitudinal position of the Ackerman reference:

Good values for Max Brake Torque and Brake Bias (or Brake Balance) may be configured like this:

Repeat until finding a value of Max Brake Torque where only front or rear wheels lock, but not both. Then:

Repeat until finding a value of Brake Bias where both front and rear wheels lock again, but front wheels lock before real wheels.

Enable Steering Limit in Sport mode. The movement of the steering wheel is then constrained to the range where the front tires can apply the maximum sideways grip. 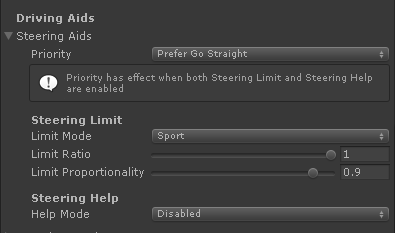 Rear drive (RWD) cars may experience a lot of oversteering at this point because rear wheels are heavily pushing and losing sideways grip. You may want to enable Traction Control (TCS) immediately afterwards (see below).

You may also enable Steering Help and configure Priority to either Go Straight or Drifting for simplified control and enhanced gameplay with keyboard / gamepad.

Default parameters are a good starting point in all these.

Safety aids may trigger frequently when testing the car with keyboard or gamepad. This is normal, as you're pushing the car to its limits constantly (full throttle, full steer, full brakes).

Still, this gives you hints on where the setup should be improved. For example, ESC triggers on oversteer and understeer. You may improve these behaviors by configuring suspension to reduce the chances of the ESC to activate.

The Sport mode limits throttle when drive wheels slip beyond the tire's Peak friction to ensure they provide the maximum traction.

Hints for minimizing the activation of the TCS: 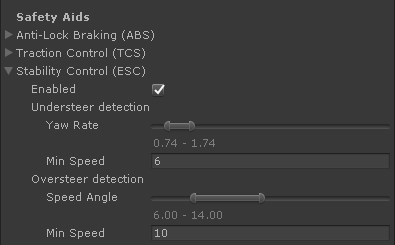 Hints for minimizing the activation of the ESC:

Works at low speeds by applying brakes to one drive wheel when it loses traction, allowing the other wheel to gain more traction and pushing the vehicle. 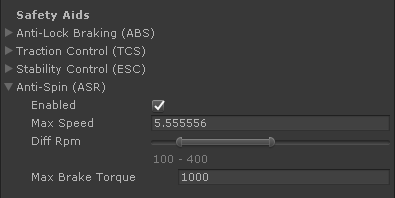 If all the above is configured correctly then the car should be reasonably drivable at this point. That was configuring the main mechanical aspects and specifications of the vehicle.

Next part is configuring the vehicle dynamics and the handling. Most of it is made with add-on components. 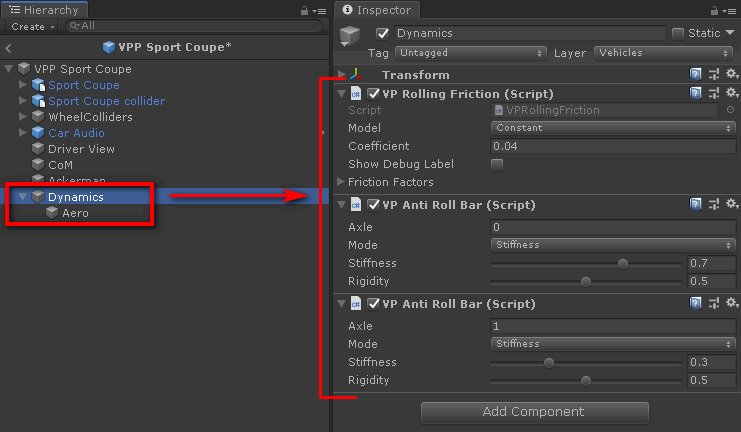 You may apply real world techniques directly for configuring the car handling.

VPRollingFriction produces drag in the wheels based on the force they're supporting. The default value is a good starting point. Rolling friction together with aerodynamics define the vehicle's top speed.

The static coefficient brings the car to a stop at low speeds (below Static Speed Threshold).

The VPAntiRollBar component links the left-right suspensions of an axle to reduce the body roll of the vehicle and allow the momentum to shift quickly. This improves the responsiveness of the vehicle when taking corners, of tweaking the car's balance in the turns.

Each VPAntiRollBar components instance affects a single axle specified by the Axle parameter. In standard cars 0 is the front axle and 1 is the rear axle.

You may configure a single anti-roll bar to the front or to the rear axle, or add anti-roll bars to both axles. The decision depends on how you feel the handling of the car. As rule of thumb:

Note that this is valid for the suspension stiffness as well (spring and dampers). 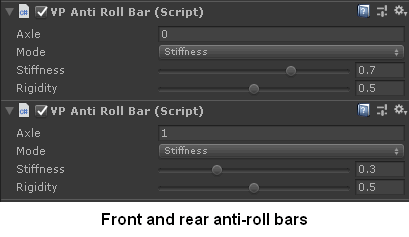 Produces aerodynamic drag based on the speed squared. This value has the most influence in the top speed of the vehicle.

Theoretically, it's the aerodynamic coefficient of the car multiplied by the frontal area. A good value for standard cars is around 0.2-0.5.

In practice, you may drive the car in a long straight (VPP provides the prefab Flat straight 50 Km x 100 m) and tweak the value until the top speed matches the specifications.

Produces aerodynamic downforce based on the speed squared. This is typically provided by the shape of the car and any spoilers it may have.

You may configure the aerodynamic behavior at high speeds by moving the longitudinal position of the Aero GameObject:

Check out the Susp column in the Telemetry window (VPTelemetry component) to check out how the downforce is compressing the suspension, and which part of the car is being pushed further.

Ensure compression values as shown in the Telemetry never reach 1.0 at high speeds. Otherwise weird physics effects will occur. If the extra downforce caused by aerodynamics compresses the suspension beyond the limit then you need to increase the suspension spring rate in the affected wheels.

If the car heavily relies on the aerodynamics (i.e. a formula racing car) then you may configure front and rear aerodynamics independently.

You may then configure drag and downforce independently at each position.