The Tires section defines the tire friction curve for the wheels in the vehicle. 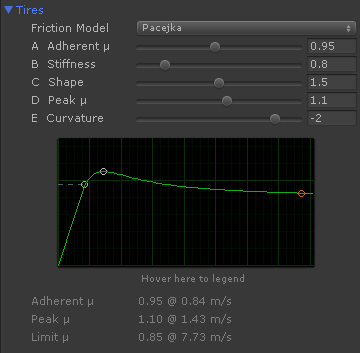 The characteristic values of the tire friction curve are shown below the graph:

This is the default tire friction curve in VPP: 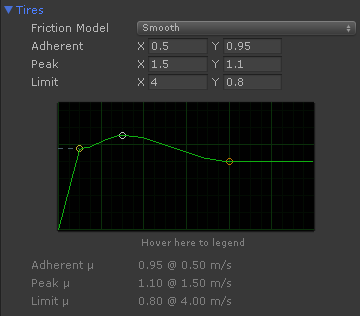 The default tire setup is very forgiving and allows a good control of the vehicle in most situations. 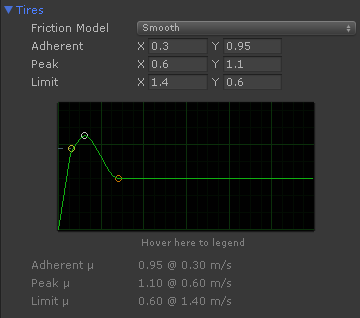 In this tire the peak friction (1.1) is reached at just 0.6 m/s. Any slip beyond that, and the friction rapidly drops 0.6. Real racing drivers have a great ability to apply the correct throttle to keep the tire at its maximum friction.

A more realistic friction shape can be achieved using the Pacejka friction model: 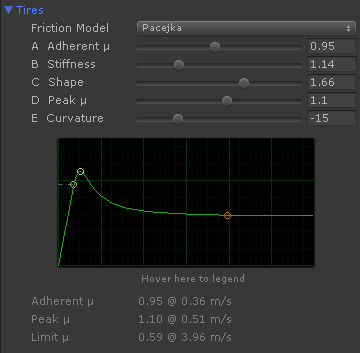 In this case Stiffness value to configures the slip where the curve reaches the peak friction at.

Torque is applied to the wheel. The tire converts the torque into a force at the contact point. This force is then applied to the rigidbody, causing acceleration and the actual motion of the vehicle.

The torque is generated by the engine and drivetrain connected to the drive wheels. While this torque can be nearly any magnitude, the grip actually limits the amount of force that is transmitted to the vehicle:

(N) is the maximum force the tire can transmit to the vehicle,

(N) is vertical downforce on the tire, and

is the coefficient of friction of the tire with the surface.

The force supported by the wheel depends on several factors: weight, acceleration, aerodynamics. When the vehicle is accelerating part of its weight is transfered from front to rear wheels. RWD (Rear Wheel Drive) vehicles have better acceleration because of the increased downforce on the drive wheels while accelerating provides extra grip. When the vehicle is braking part of the weight is transfered to the front wheels which get their grip increased while braking. This is why brake systems typically apply more brake power to the front wheels (brake bias).

The more weight the more grip but also less acceleration due to the vehicle's mass. As rule of thumb an acceleration of 1G requires all the wheels to perform a coefficient of friction of .

Aerodynamics have a huge influence on grip because it greatly increments at high speeds. Formula-1 vehicles can achieve a sustained lateral acceleration of 4G at high speed curves. Without the effect of aerodynamics this would mean tires with coefficient of friction of 4. Typical road tires can reach 1. Racing slick tires can perform in the range of 1.7 - 1.9. Only aerodynamics can increase the grip further.

When the torque is greater than the grip of the wheel, the excess of torque causes wheel spin, and the tire slips over the surface. In typical friction curves exceeding certain slip value reduces the grip. In addition, forward slip reduces the tire's sideways grip so the vehicle can easily slide sideways.

Tips for improving grip and acceleration

Here's a step-by-step explanation of the different factors involved on lateral tire forces and cornering rate: 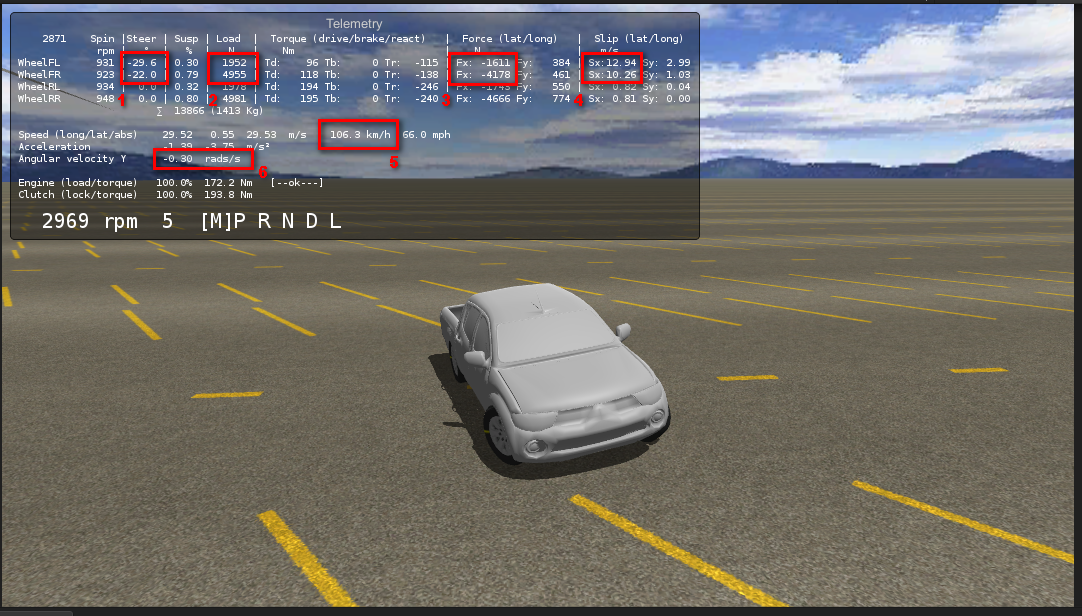 This is the tire friction curve in the vehicle: 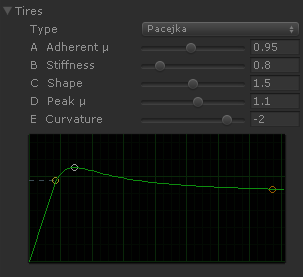 The peak friction is developed at 1.5 m/s. As the front wheels are experiencing 10-12 m/s, this means they are developing the minimum friction (a coefficient of friction of ~0.82).