Optional components each one adding new functionality and features to the vehicle.

You could write your own add-on components easily if the provided components don't cover your needs or you need other features.

Manages and plays the audio effects of the vehicle. 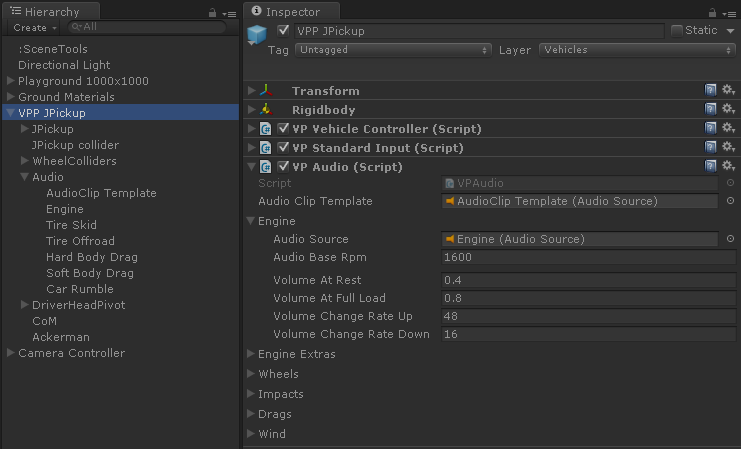 AudioSource components for the Turbo and Transmission noises. Must be part of the hierarchy of the vehicle and positioned properly.

AudioSource components and AudioClip objects for the wheel and tire effects. AudioSources must be part of the hierarchy of the vehicle and positioned properly, typically at the center of the vehicle.

AudioClips to be played when the car collides. Clips for hard and soft surfaces can be defined. If the soft clip is missing, the hard clip will be used also at soft surfaces (but not the opposite).

AudioSources played while the vehicle's body is dragging on another surface. They must be part of the hierarchy of the vehicle and positioned properly, typically at the center of the vehicle.

Wind
AudioSource played based on the vehicle's velocity. It must be part of the hierarchy of the vehicle and positioned properly, typically around the center of the vehicle.

Triggers the tire marks and particle effects based on the state of the tire and the ground material being contacted.

The actual particle emitters and tire marks renderers are managed at the Ground Material Manager. 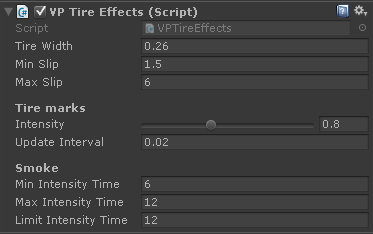 Tire width
Width of the tires. Used for the tire marks and the particles.
Min Slip, Max Slip

Slip range in m/s to be considered minimum and maximum for all the effects. For example, the skid marks are most intense above Max Slip, and they vanish below Min Slip.

The effect use the combined slip which can be seen in runtime in the Telemetry:

Settings for all tire marks on any terrain.

Intensity
How "easy" is for the tire marks to reach their maximum intensity.
Update interval
Interval in seconds at which new marks are generated. Bigger intervals increase performance, but visually reduce the quality of the tire marks.

Smoke is generated when skidding over hard surfaces continuously during some time.

The internally accounted time is decreased when the tires are not skidding. 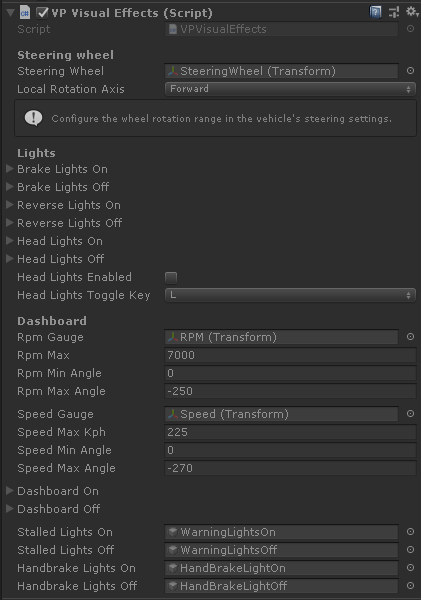 Rotates the vehicle's steering wheel object according to the actual steering value.

Shows or hides the given objects for simulating the various lights of the vehicle. All of them are optional.

Gauges and lights of the vehicle's dashboard.