The differential block consists of one input and two outputs. Differentials always split the input torque 50% to each output. Torque transfer among outputs takes place afterwards depending on the type of differential and the state of the input and the outputs.

The standard Vehicle Controller exposes the differential configuration under the Driveline section.

Differential blocks may be used in any number and combination (driveline examples). All expected and unexpected effects are simulated. 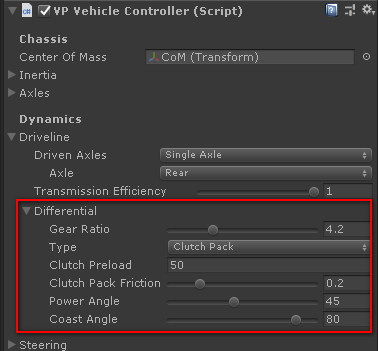 Gear Ratio
The input to output reduction ratio of the differential. Car specifications commonly refer to this ratio as Final Ratio. This setting is common to all differential types.

A standard open differential, as mounted in most commercial vehicles.

Video: How a Differential works?

A spool forcing both outputs to rotate at the same rate, with all the side effects.

Locked differentials are typically used in drifting. In normal situations the car will typically refuse to steer.

Outputs are coupled together based on the parameters. The lock state and and the torque transfer depend on the difference of speed between both outputs.

The viscous differential can be set up to mimic an open differential, or in the extreme, a spool, and virtually any combination in between. Examples:

Lock state and torque transfer depend on the input torque engaging a clutch pack. They behave as open differential when no torque is applied or one of the outputs has no resistance (i.e. when a wheel is lifted).

For example, a 4:1 Torsen differential can be configured by setting 0 preload and both ratios to 4.

The best way is using the wheel spin chart of the Performance Display component. It shows the wheel circumference speed for each wheel. You can see the difference of speed between left and right drive wheels, and compare how the differential affects it in the different situations.

Here's the chart for an open differential when heavily accelerating after a corner. The inner wheel losses traction and reduces the acceleration: 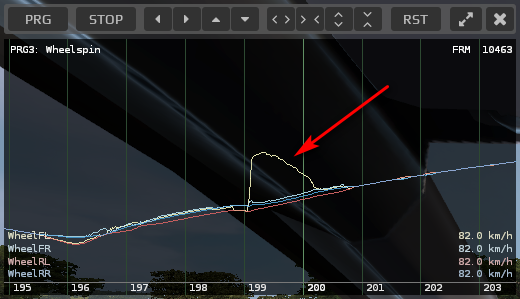 The same situation with the default clutch pack differential. After a minimum slip the differential locks and allows both drive wheels to gain traction at the same time, providing better acceleration: 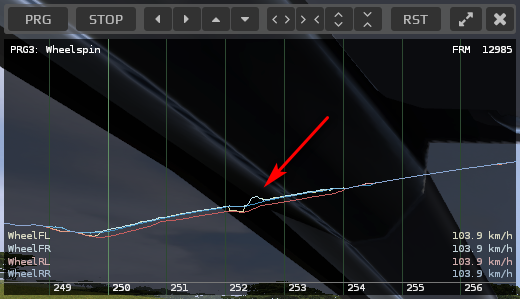