Optional components that show useful information from the vehicle in runtime.

Shows detailed numeric data on the internal state of the vehicle and each wheel in real-time. 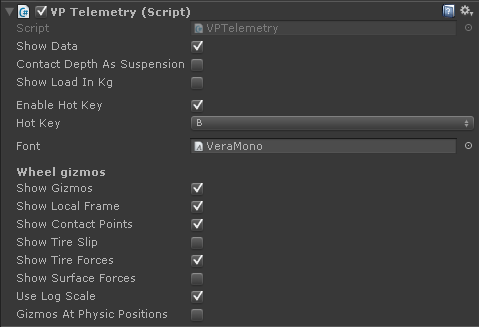 Show data
Shows or hides the actual GUI window with the data.
Contact Depth As Suspension
Shows the suspension values (Susp column) as compressed distance (m) instead of compression ratio (%).
Show Load In Kg
Shows the load per wheel (Load column) in Kg (weight) instead of Newtons (force).
Enable Hot Key, Hot Key
Enables a hot-key for toggling the Telemetry GUI window. Default key is B.
Font
Font to be used for the telemetry data. Default (recommended) is VeraMono.

Show different gizmos in runtime representing the state of the wheels. Gizmos are visible in the Scene view and in the Game view with the Gizmos toggle enabled. 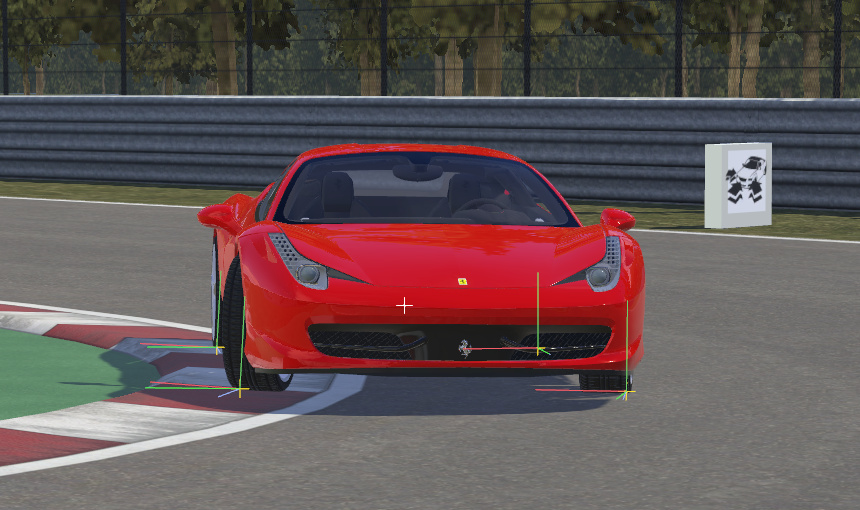 Show Gizmos
Shows / hides all gizmos
Show Local Frame
Local transform of the wheel. Forces and velocities are calculated with that reference frame.
Show Contact Points
A crossmark on each contact point.

These gizmos use a colored line for denoting the magnitude and direction of the physic property:

Show Tire Slip
Speed the tire is sliding over the surface. It matches the Slip (lat/long) column at the Telemetry.
Show Tire Forces
Force being applied by the tire. It matches the Force (lat/long) column at the Telemetry.
Show Surface Forces
Forces external to the tire required for keeping the vehicle steady on slopes.
Use Log Scale
Magnitudes used for draw the lines are taken in logarithmic scale. Recommended.
Gizmos At Physic Position
Draw the gizmos at the positions reported by the Physic engine, without any interpolation nor correction.

Advanced data logger and live performance charts for a variety of data coming from the vehicle. The zoom and panning controls allow fully detailed inspection. 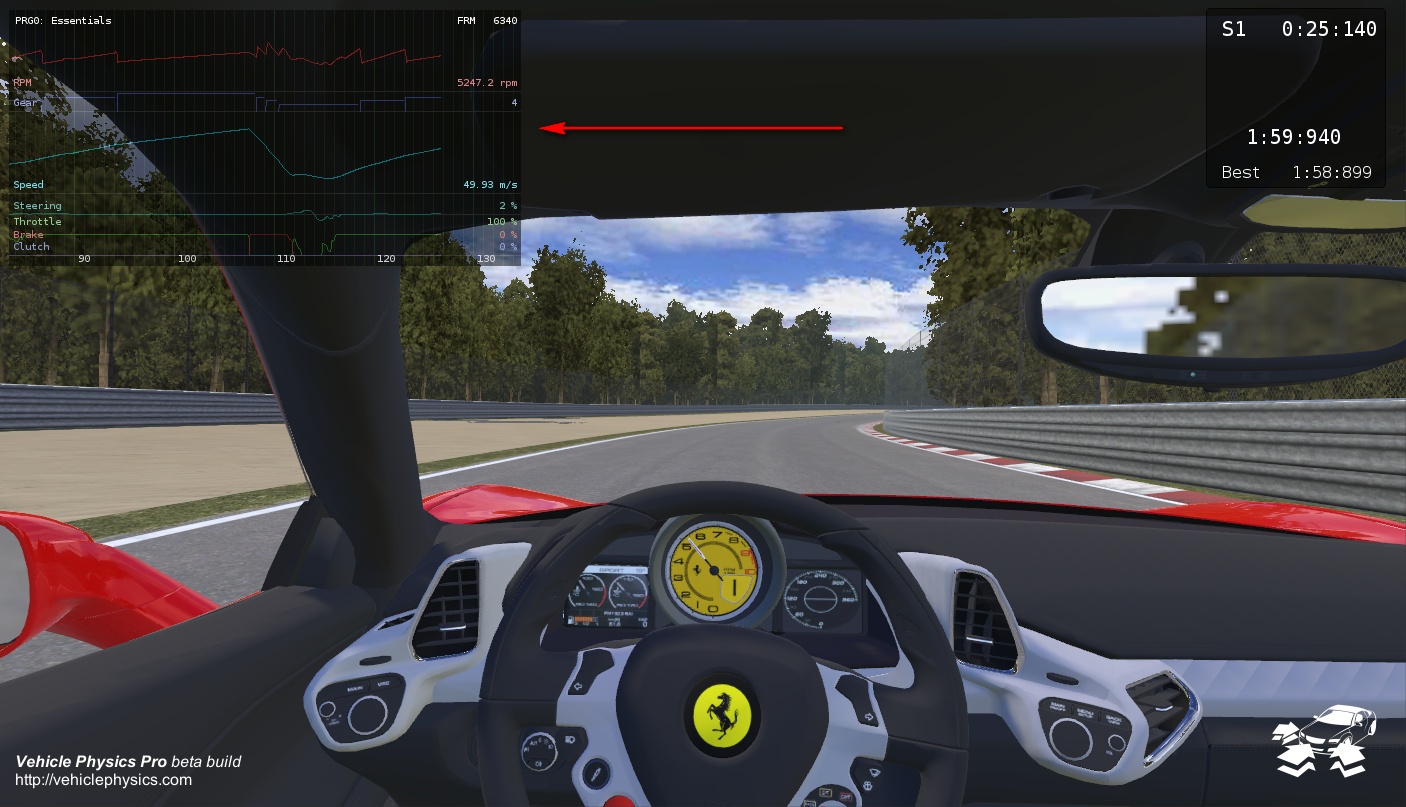 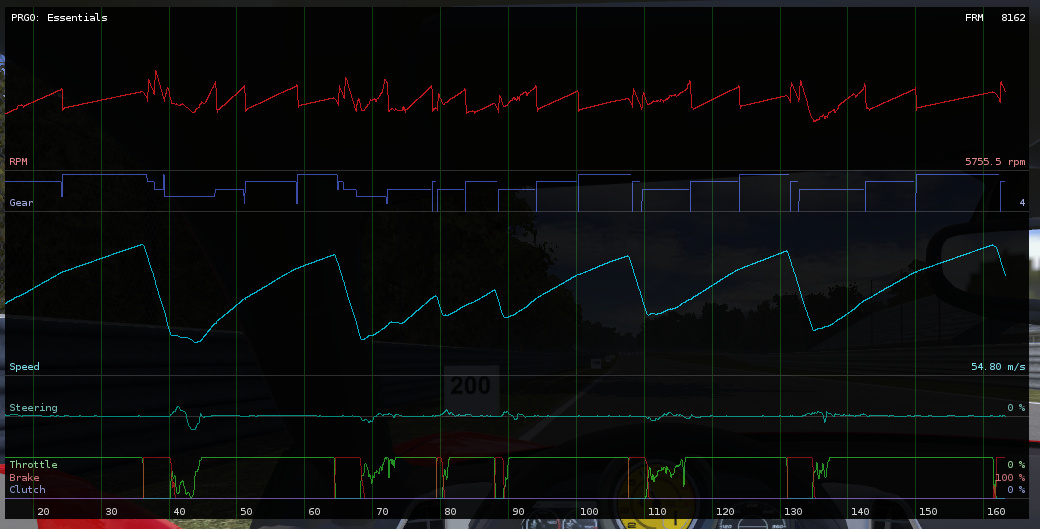 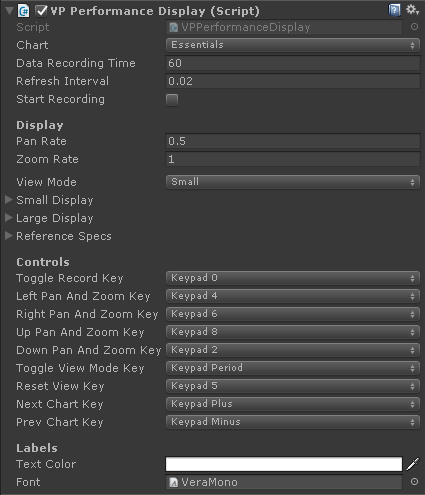 Chart
Selected performance chart
Data Recording Time
Size of the buffer of the data logger
Refresh Interval
Time in seconds between each display refresh. This doesn't affect the rate the data is recorded.
Start Recording
Begin data recording as soon as the vehicle is enabled.
Pan Rate
How fast are the panning operations
Zoom Rate
How fast are the zoom operations
View Mode
Select the display size among Small and Large
Small Display
Position, size, background color and transparency for the small display mode
Large Display
Position, size, background color and transparency for the large display mode
Reference specs
Bounds or ranges for several parameters of the vehicle (max speed, max rpm...). This is used for better fitting the charts in the display.
Controls
Keys assigned to each operation. Defaults:
Text Color
Main color for the labels. Channel colors are tinted with this.
Font
Font to be used for the text labels. Default (recommended) is VeraMono. 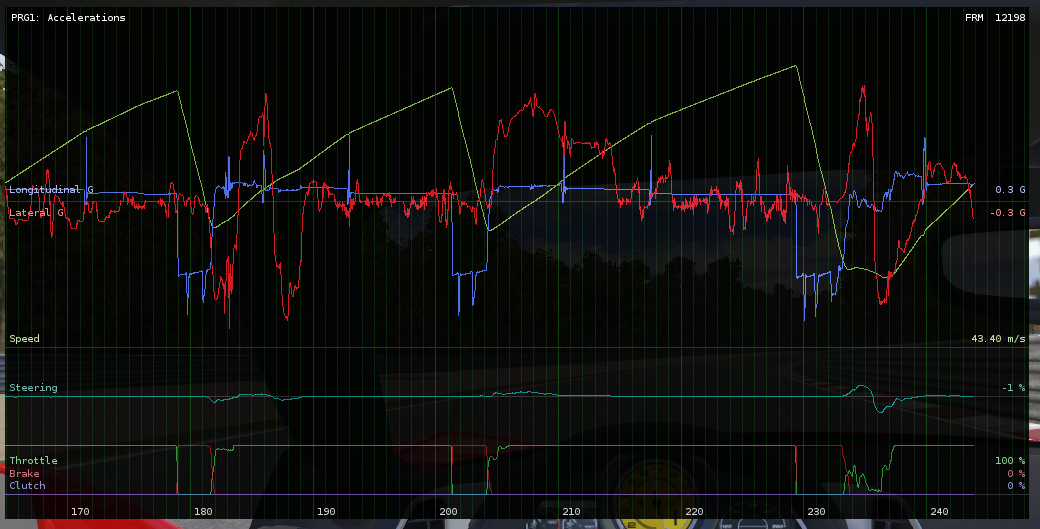 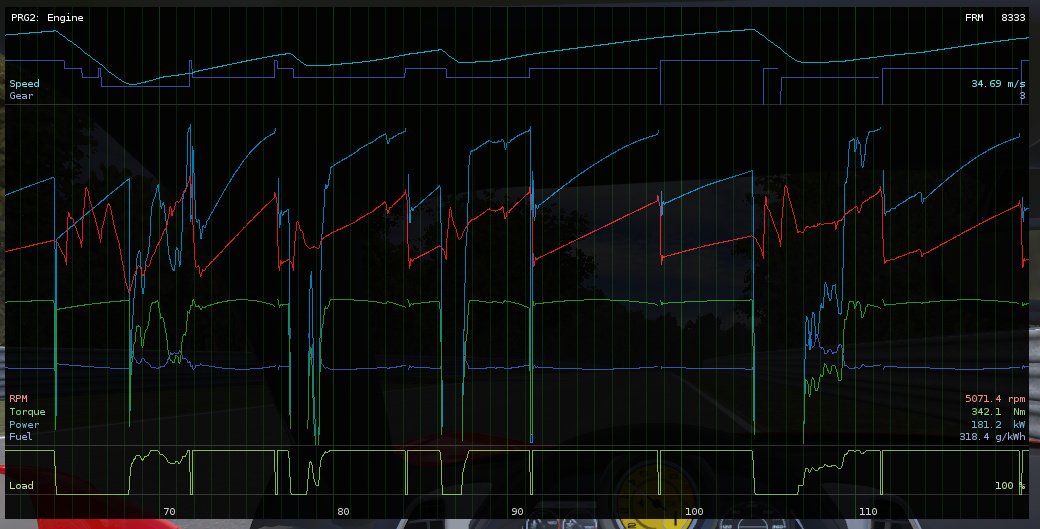 Wheel circumference velocity for each wheel. If the wheel is gripping without slipping, then this velocity is the road speed of the wheel. Wheelspin is shown as sharp upward spikes. Wheels locking due to braking are shown as a sharp downward spike. 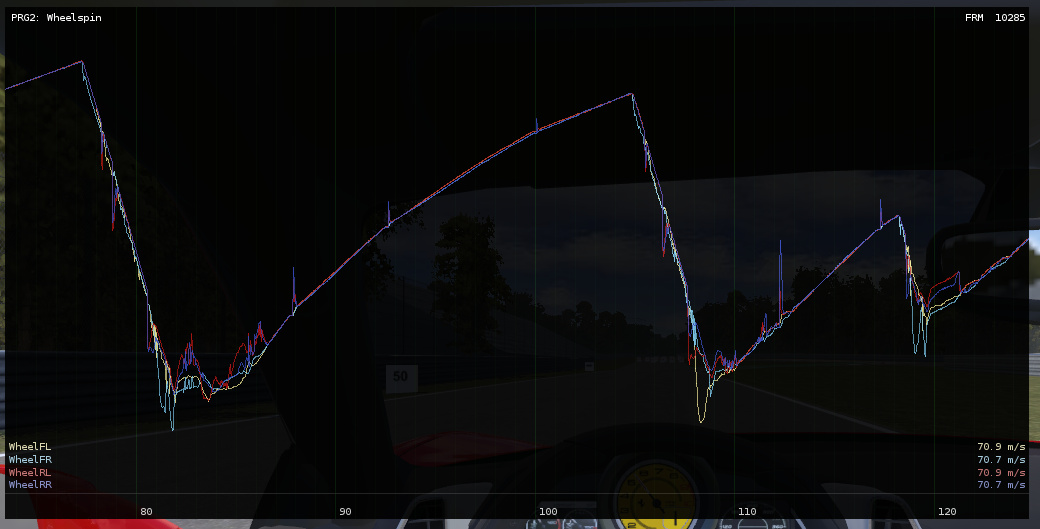 Available remaining travel of the suspension for each wheel. If the trace reaches the bottom of the chart (0 mm) then the suspension is fully compressed and has reached the limit. Includes the speed trace for reference. 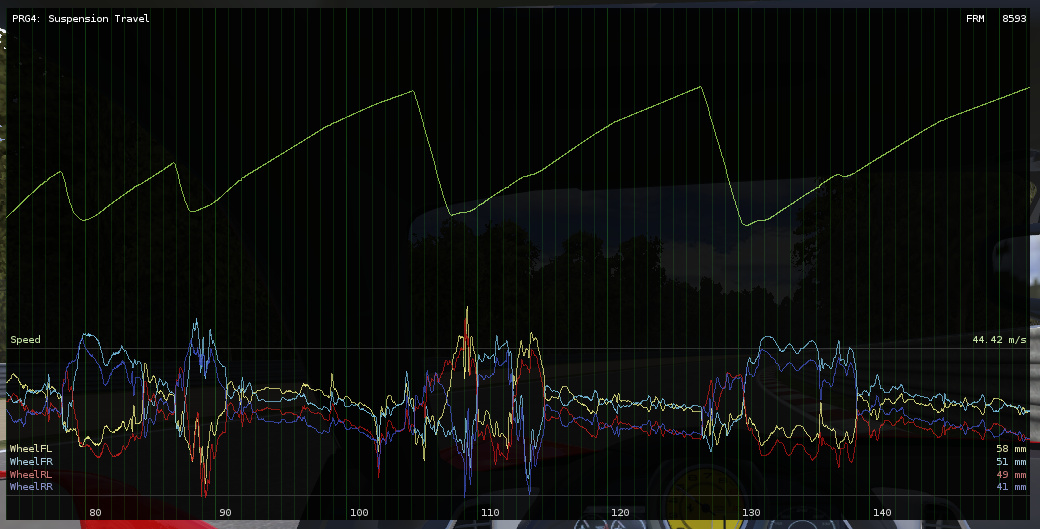 Load supported by each wheel. Includes the speed trace for reference. 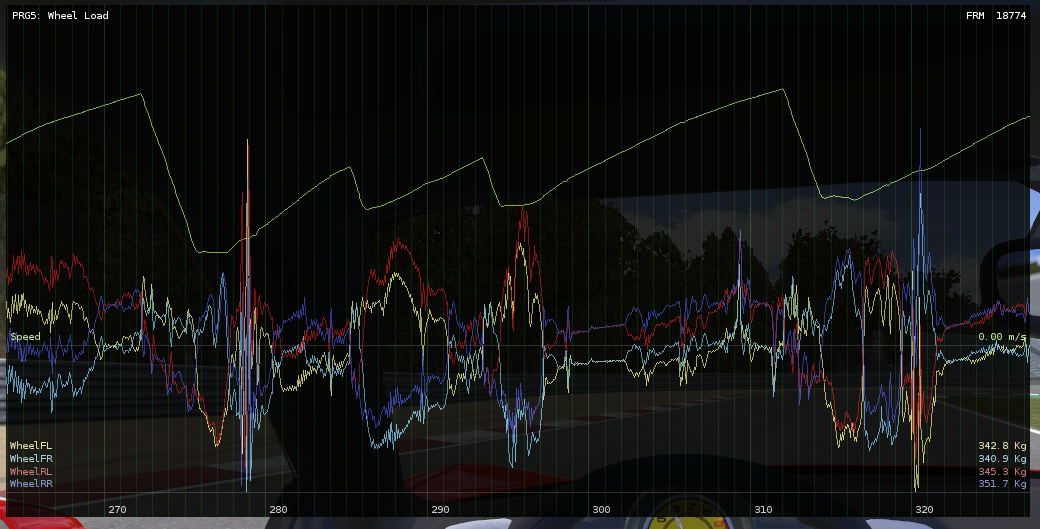 You can write your own data logger by deriving from the PerformanceChart abstract class. Set it at the customChart property of the VPPerformanceDisplay component.

The PerformanceChart class exposes several properties you can use for gather the data and configure the visualization:

Draws 3D cones starting at the wheel's contact points representing the forces applied by the wheels to the vehicle. 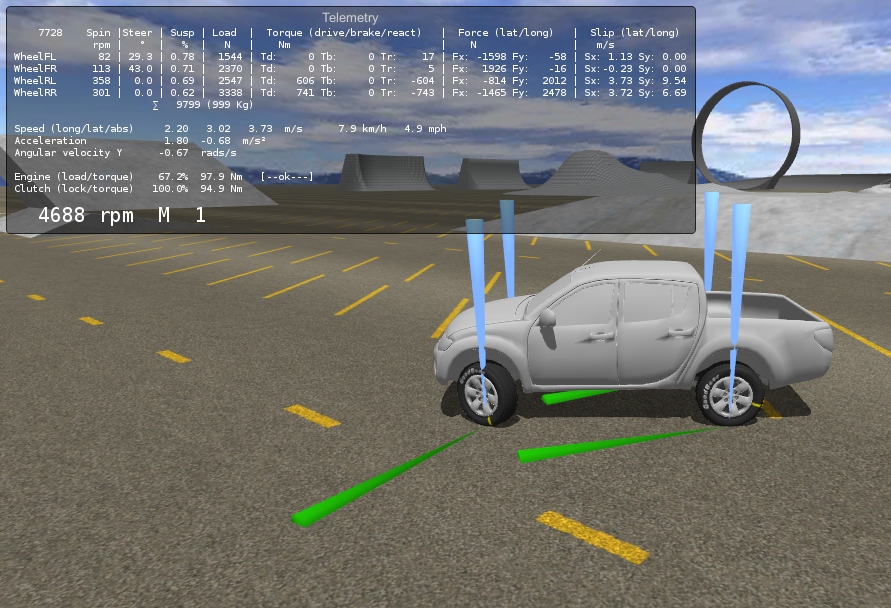 Base Length
A reference length for configuring the dimensions of the cones.
Show Downforce
Show the downforce at each wheel
Show Tire Force
Show the tire forces
Combined Tire Forces
Shows a single combined force per wheel. If disables, shows separate cones for forward and sideways forces.
Use Log Scale
The magnitudes used for the length of the cones are taken in logarithmic scale. Recommended.