The Engine block simulates a standard combustion engine. It provides output torque in Nm based on the configuration (green curve in the graph). As result of the torque and the rpm range the engine develops the corresponding power in kW or HP (blue curve in the graph).

The torque curve is mostly defined with the Idle, Peak and Max Rpm parameters. Circles in the graph represent these settings (horizontal: rpm, vertical: torque in Nm). Curve Bias adjusts the shape of the curve.

The actual engine specifications (Max Power, Max Torque, etc) are calculated and displayed below the graph.

The rotational inertia of the engine as measured in the output shaft (kg·m²).

Main effects of the engine inertia:

Torque exerted by the engine when throttle is not applied as measured in the output shaft (Nm). Engine friction configures:

Engine friction torque is calculated as:

Where is the resulting engine friction torque in Nm and is the angular velocity of the engine in rad/s.

Torque Cap configures an upper limit to the engine torque (Nm). Many engines have an electronic limitation in their torque across a range of rpm.

Max Torque
Maximum torque (Nm) the engine can provide. The "unused" torque above the limit is shown in the graph as dashed green.

Torque cap also reduces the fuel consumption in the rpm range where the limit is applied.

Rpm limiter configures an upper limit to the rpm the engine can reach by actively producing torque. When enabled, the rpm limit is shown in the graph as vertical dashed orange.

Action to take when the engine reaches the Limit Rpm.

Limit Rpm
Maximum rpm value allowed.
Cut Off Time
In Injection Cut mode, this is the time (s) the torque is stopped when reaching the Limit Rpm value

Defines how to apply the torque that keeps the engine at idle rpm and prevent it to stall.

Max Idle Torque
Percent of the total engine torque that can be used to prevent the rpm to fall below Idle Rpm.

Can Stall allows the engine to stall. When the engine is stalled the ignition key may be used to start the engine. The engine may also be started "inertially", that is, leave the car roll on a slope to gain some velocity, press clutch, engage a gear and release clutch.

Stall Sensitivity
How easy is to stall the engine once the rpm fall below Idle Rpm. The more value, the easier to stall.
Extra Friction
When the engine is stalled it applies this extra amount of friction torque (Nm).
Starter Effectiveness

How effective is the starter motor when starting a stalled engine. This is a somewhat "subjective" value that behaves differently in each engine setup. The more value, the faster and more reliably the engine starts. The lower value, the harder to start. Below some point the engine won't start at all.

This may be used to simulate a drained battery or difficult weather conditions (i.e. start the engine in low temperatures).

The parameters for fuel consumption define the Instant Fuel Consumption rate in grams per second (g/s) that can be read in the Data Bus (Vehicle channel, EngineFuelRate entry).

Max Fuel Per Rev
Maximum amount of fuel in grams (g) the engine can "swallow" in a single rev when applying full throttle. This parameter defines the specific fuel consumption (BSFC) of the engine.
Fuel Density

The engine torque curve (green) is the sum of the raw combustion torque (dotted yellow) and the engine friction (red). 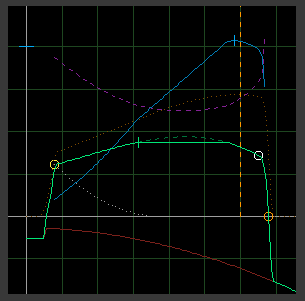 The Engine parameters in Vehicle Physics Pro the define specific points (circles in the graph) that will be crossed by the final engine torque curve (green). But it doesn't mean these points will make a maximum or minimum torque, for example. The rpm range in the real dyno charts is typically cropped. Real tests won't likely push the engine until the torque actually results zero, as the rev limiter will be cutting down the injection first. So you must figure out which torque curve would result if the engine would be pushed beyond the rev limiter. Max Rpm is the rpm where the raw torque has decreased so much that is entirely canceled by the engine friction and the final torque results zero. Only friction torque can be produced beyond Max Rpms. This settings is deduced based on the shape of the real dyno chart.

The peak point (white circle in the graph) represent the point where the raw combustion provides the maximum torque. This raw friction (dotted orange) always increases before the peak rpm, and decreases after it. Once the engine friction is subtracted from the raw torque you get the actual engine torque. The point of maximum engine torque the small vertical white line crossing the green torque curve.

The difficulty on setting up the engine curves is that you need to figure out both the raw torque and the friction torque so they result in the final torque curve that fits the real specifications. It's not trivial and requires a bit of practice. But most engines can be configured with good precision.

This is the curve and specifications from the figure at the top: 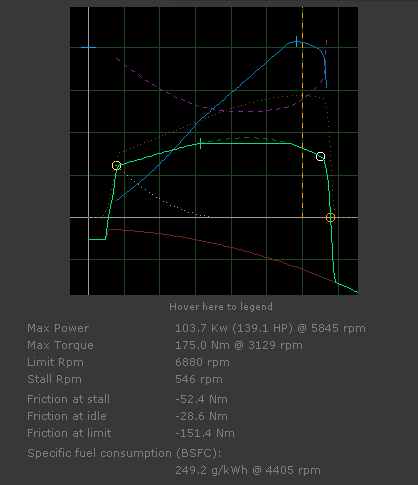 Note how the maximum torque is reached at 3129 rpm while the "Peak Rpm" setting is 6515. This Peak Rpm is the point of maximum raw combustion torque (dotted yellow). Additionally, the rev limiter won't let the engine go beyond 6000 rpms. The original specifications are cropped just at that point. 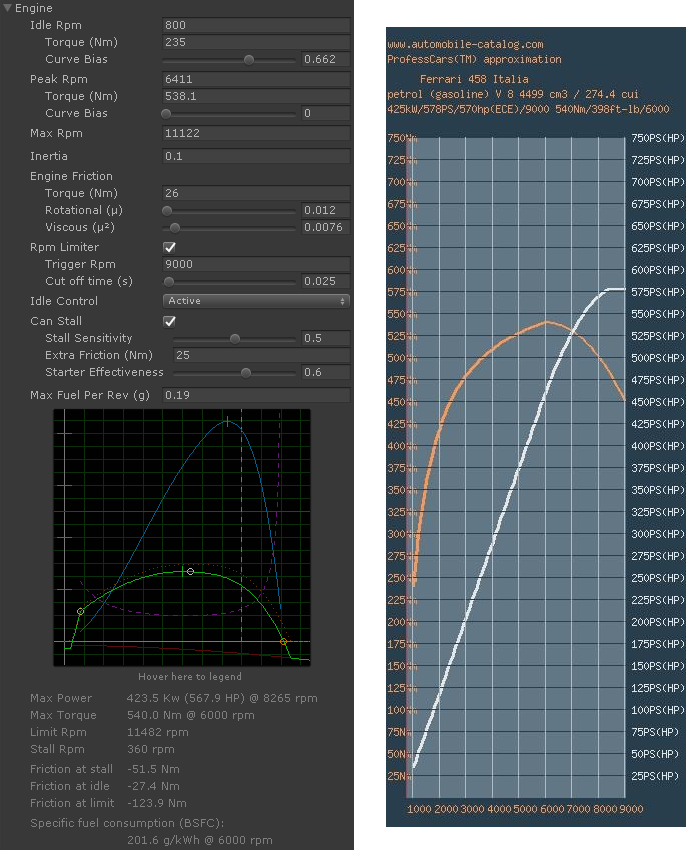 This is a very good curve fit. Max Torque matches the specifications exactly (540 Nm @ 6000 rpms), and the Max Power is very close as well (423.5 vs. 425 kW). The flat end in the power curve surely represents an electronically imposed power correction, as it doesn't fit with the other curve data.

A radically different example is a truck engine. These engines provide a lot of torque at very low rpm. These parameters closely match the specifications of the real model:

A custom vehicle controller using the Engine block should populate the vehicle's data bus so all other components attached to the vehicle can read the engine and clutch state from the bus.

Add this code to the overridden VehicleBase.DoUpdateData() method in your controller to populate the data bus correctly. m_engine is the private var with the Engine block instance.