The input components read the input values from the user and passes them to the vehicle. This includes steering, throttle, brakes, gear lever, etc.

The vehicle receives the input data in the data bus, Input channel (VehiclePhysics.Channel.Input).

You could write your own input component easily by writing an add-on component that modifies the values of the Input channel in the Data Bus. For example, an AI controller or a remote player.

Press and hold the control assigned to the ignition key (K by default) for starting the engine.

The vehicle implements the ignition key with three positions: OFF, ACC-ON, and START

Reads the input from Unity's standard Input class, which is configured at Edit > Project Settings > Input. 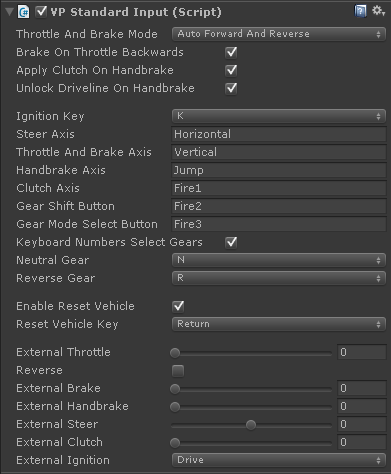 Behavior of the vertical input axis:

Brake On Throttle Backwards
When the vehicle is moving backwards throttle (up) acts as brake.
Apply Clutch On Handbrake
Useful when handbrake affects the driven wheels. Allows more immediate handbrake effect (otherwise the engine would be counteracting the handbrake).
Unlock Driveline On Handbrake
Disengages the center driveline block (differential or torque splitter) in AWD when applying handbrake. AWD connects front and rear axles. Thus, applying handbrake at one axle affects the other axle as well. This setting disconnects AWD axles when pressing handbrake, allowing an immediate effect on the hand-braked axle.
Ignition key
Single press moves key to Acc-On. Press and hold for Start the engine. Press with Ctrl for moving the key to Off.
Steer axis 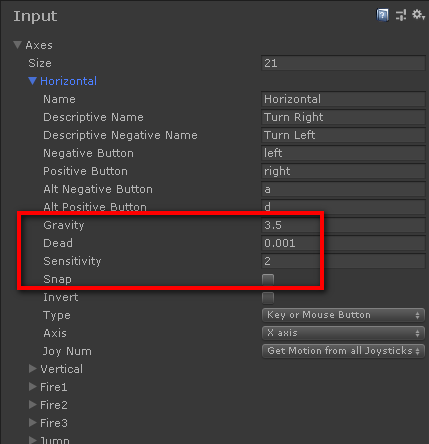 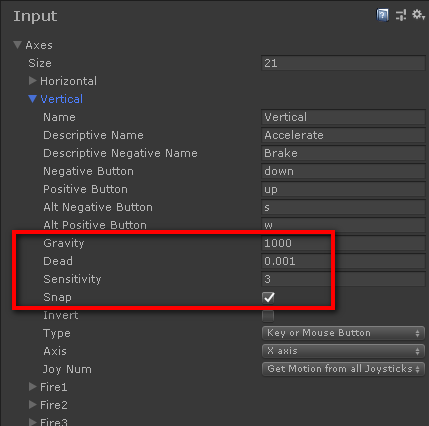 The behavior will be affected by the option Throttle And Brake Mode.

Handbrake axis
Axis for the handbrake. It can be a regular button defined at Input settings (sensitivity and gravity will apply). Press with Ctrl to lock/unlock all brakes.
Clutch Axis

Axis for the handbrake. It can be a regular button defined at Input settings (sensitivity and gravity will apply).

Default value for clutch axis is Fire1 (Shift). This assignment should be changed or removed on mobile/touch devices. Otherwise, the clutch will be engaged whenever the screen is touched.

Button for gear shifting. It must have positive and negative bindings defined at the Input settings (Edit > Project Settings > Input): 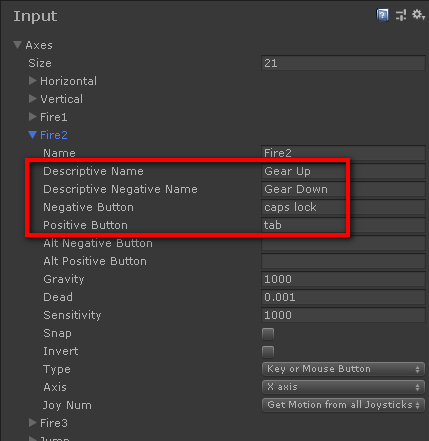 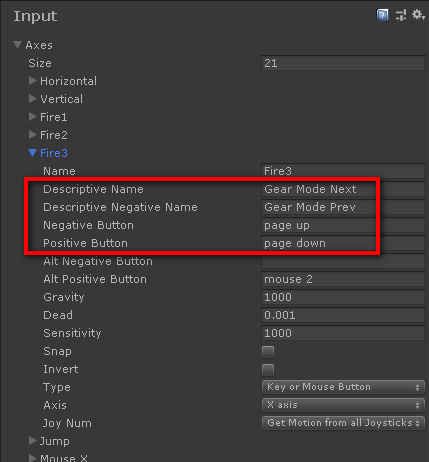 Useful for debug or fine-testing purposes in the Editor. Can also be used for modifying the input from scripting without having to deactivate the VPStandardInput component.

Supports joysticks and steering wheel controllers via DirectInput, including force feedback where available.

Selected Device
Ordinal number of the device. 0 is the first device, 1 is the second device, etc.
Device Model
Applies internal mappings for the selected device model.

Digital Handbrake Rate
How fast the handbrake gets applied when pressing the handbrake button.
Steering Non Linear Bias
Applies non-linearity to the steering. 0.5 is linear, above is faster response, below is slower response.
Axis Count For Clutch
The device is considered to have a Clutch pedal when the number of reported axis is this value or greater.
Fallback To Standard Input
If no device is detected the VPStandardInput component (if present) will be enabled instead.

Limit the ranges for Throttle, Brake and Clutch. For example, setting Brake to 0.00 - 0.50 means that the full brake pressure will be applied when reaching half of the pedal travel.

Ignition Key Position
Where to set the ignition key on startup.
Automatic Gear Position
The position of the automatic gear lever on start.
Manual Gear Position
The position of the manual gear lever on start.
Handbrake Locked
Starts in handbrake lock mode, which means that both handbrake and service brake are applied. Releasing handbrake will release the service brakes as well.

Force feedback is based on the difference of slip at the sides of an hypothetical tire of certain width. When the vehicle is steering an edge of the tire slips more than the other edge. This difference causes a counter-force that tries to counter-steer the wheel to cancel such slip differences. This counter-force is calculated as torque that is applied to the wheel device.

Mappings of the different actions to controls in the Logitech G27 wheel.